To summarize the project activities implemented in the first 6 month of 2014 and work for action plan of last 6 month in 2014 as well as discussing on the proposal for the project extension to the end of 2015. In July 27th 2014, a mid-year meeting was organized by the Project Steering Committee in the People Committee of Phu Yen District, Son La Province.

The project “Povety Alliviation through Livestock Development in the Northern uplands of Viet Nam” Phase 3 called PALD 3 is funded by the Swiss Agency for Development and Cooperation (SDC) under Swiss Government. The project isimplemented by the National Institute of Aimal Science and the AVSF in three Northern upland provinces of Phu Tho,Yen Bai and Son La. The project has gained its objectives in building up capacity for local partners, increasing income for farmer, and improving the lifelihood of rural poor.

The project activity in first 6 month of 2014 as well as plan for work in the 6 last month of 2014 is presented in the meeting by the members of PALD project. Many contribution from the project steering committee member as well as the recomendadtion of participants for the project plan of the remained project time. All the participant  proposed for project extension to the end of 2015 to meet the requirement of 5 newly joined district.

Speaking in the meeting, the representative of NIAS, ICD and espcially the Swiss donor agency are recording the effort and achievement of the project, and would like to receive the detailed report and peered work plan expressing the need of extension to 2015, based on that the SDC and MARD will consider for finalizing of  its extension. 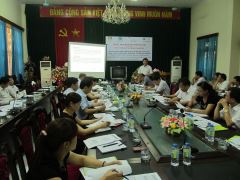